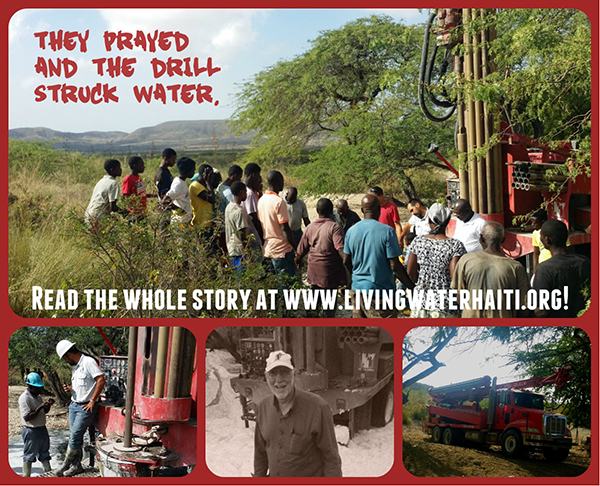 Living Water Ministries has devoted 31 years to spreading the Gospel to the people living in remote villages in Northwest Haiti. The name was selected because it described the mission to take living water to the people just as Jesus offered to the woman at the well. During the last few years it has become evident that Living Water was meant to also search for the physical water that so many villages desperately needed.

This past week (04/03/17) we spent all week working with Blue Ridge Drilling Mission. They had drilled eight wells for two other mission groups only to find one for each group that produced some water. These wells were drilled in an intense effort to find water to a depth in excess of 500 feet. This brought discouragement to everyone, especially since we had hired Blue Ridge to drill two places for us at the cost of $10,000.00. It was decided to drill in Ti-Riviere where there was a surface spring and asked the people from the church to begin praying.

As the drilling rig entered the village, heading for the spot where the drilling would take place, the villagers gathered around.  Everyone, including the well drillers, circled up for prayer to seek God’s favor and to ask Him for water. We watched for hours while the driller set up and kept drilling 20 foot sections at a time without any results. Then at about 100 feet the drillers were more confident for two reasons: (1) they found a spot with gold and (2) they found the type of rock that usually indicated there is water. Now we watched with greater anticipation as they continued to add more 20 foot sections of pipe. At 150 feet they hit water. Praise the Lord!!! The drillers explained that more water might be found if we go down to 200 feet. Because the entire Northwest area desperately needs water, we can have enough water in this well to help others. So we made the decision to go to 200 feet.

It was interesting that at that same moment a dark cloud came over the mountain behind us and dumped a huge amount of rain all over us until we were soaking wet. I laughed as in my mind I heard God say, “You asked for water so here it is – coming up from the ground and down from the heavens.”

What a mighty God we serve.

It seems odd that a whole village could be in such a critical position that it has no water. Imagine that you have no running water in your house or even that you would need to walk down the street to a community water pump. Then think about the changes to your daily routine you would need to make in order to make sure you are home to go to the pump at the times the lock on the pump is removed so you can pump your water. Life without access to clean water would bring chaos.

Living Water Blog is Up!